With so many new LEGO properties at one’s perusal today, it can be a staggering prospect to decide on a building forte. So, what are some personal factors that you can take into consideration to help you get the most out of the LEGO themes that you collect? Read on!

Many of us have heard that by learning a person’s hobby(s), one can learn things about who they are. Like how high-risk pursuits (think outdoorsy ventures) may indicate that the individual knows how to channel energy, and take calculated risks. Or like how creative hobbies (think art, culinary skill) may suggest that a person is dynamic and imaginative.

But what about our favorite brick, or more precisely, the specific product lineups LEGO has available?

From my perspective, keeping a hobby is not peripheral; it is central. If you do not have a hobby and are thinking of jumping in – don’t be afraid of *not* mastering it… So look within yourself, consider and choose.

Now let’s face it, LEGO is simply just the best for this. LEGO is superb and very intuitive solo or in person-to-person interaction.

There is a set, a lineup, a theme, a niche for everyone to experiment in and learn from. With LEGO, you really can’t go wrong – as long as one doesn’t merely hoard it and divest it of its essential purpose. Use and PLAY!

Don’t Let Special Interests Own You.

It seems like when we have an “unusual” interest, or one that falls outside the norm for our age or position in life, we are often expected to have an answer as to why we have the interest.

Especially if it is an interest that has stayed with us from our early years on planet Earth.

Why do you like that? What draws you to that?

All common questions when a “novelty” appears on the scene… ie. in conversation, through shared activity, or finding out via snooping.

Most instances of engagement with a questioning non-hobbyist don’t require giving any more than a plain answer. But I’ll be frank and admit that beyond a certain point and on some unfortunate occasions, my answer would just be a blank and telling look: “Are you making this your business? What business is this of yours?”

As a little LEGO Maniac, I once heard an acquaintance tell a buddy of mine: “Why don’t you get into more cool stuff? You just like Town sets because it’s easy. You don’t ever wanna have to think outside the box.“

To which my buddy aptly replied: “No, I like it because not everything has to be cool like that.“

How many adults think like my acquaintance did, without ever saying it out loud? People – sometimes rightly, sometimes wrongly – try to find a pattern in most everything.

Fortunately, LEGO in general is not exactly a hobby that ever quite warrants much explanation, even for grown-ups. But it still holds true regardless: evolve or truncate a hobby only through willing and independent reflection, but not in order to skirt under the radar of a notable skeptic in your life.

Absolutely, a hobby – and by extension, collecting specific LEGO themes – can reflect you. But remember that neither a LEGO theme nor other people should pigeonhole you… at least, not if it’s untrue or subverts your own “ownership” of the hobby interest.

A Word to the Aspiring LEGO fan.

With the present plethora of LEGO sets and (to a lesser extent) themes, it could be all-too-easy for a new/aspiring LEGO fan to be swept away in a cascade of glorious bricks, without truly taking stock of what it is they fancy specifically. It can be fun to be swept away, but if you lose your wallet in the process – your hobby will likely drown before it even has a chance to “land-ho!” in LEGO Land. So, if you’re new, have a look around, find your fancy and stick to a theme or two at first.

Now, with that said, don’t go and put a cap on your collection capacity simply because of practical concerns (ie. space). If anything, limit your collecting habit for conscience reasons. But otherwise, let your inner LEGO Maniac collect that brickin’ LEGO!

Devise ways to increase your available space to be able to accommodate your dream collection.

Don’t just stop at the limitation.

Instead of thinking “I can’t”, think: “How can I?” Think of ways to best the limitation! Acquiring that habit will be even more fulfilling than simply acquiring your LEGO collection and moving on.

So You’re New to LEGO. Bricks for Thought…

Are you a purist, customizer, collector, world-builder? Good at making deals with people? Are you meticulous? Would you enjoy memorizing new building techniques in sets? How about taking a set and visualizing the various ways a particular brick can be used? Do you take a light-footed or heavy-handed approach to things? Are you frugal (maybe interested in reselling unneeded bricks from a new set)? Or are you extravagant, and more interested in collecting rather than selling? 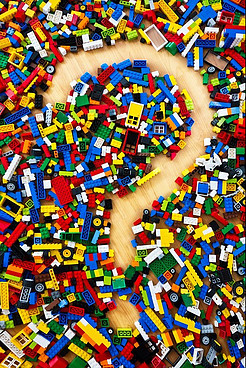 Some LEGO themes do indeed lend themselves more so to collecting than play. These kinds of collector lines might appeal to the nostalgic or idealistic, or those that enjoy the accumulation of meaningful attachments and grandeur over time. I can relate to this kind of LEGO theme quite easily myself.

In fact, it is one of the things that sparked and continues to spark my interest in BIONICLE, as well as other retired themes with a set quantity of sets to seek out.

If you’re new to LEGO and want to collect, then consider short-lived themes or sub-themes (like Nexo Knights, or Lego City Deep Sea Explorers, as examples of just 2 fairly recent lineups) – it could be just what you’re looking for.

The LEGO Themes That You Collect Are Just the Beginning.

LEGO is such an amazing passion to have. It can be an end in itself, or it can be a beginning from which to branch out into a myriad of other areas of life. Not only can the LEGO themes you collect be a source of pure fun, they can also be a source of inspiration!

Perhaps a LEGO Mixels or BrickHeadz collector is on track to being a skilled comedian or cartoonist. Perhaps a BIONICLE fan recognizes an interest in industrial design, or ancient culture. Or maybe a fan of medieval and heroic LEGO (think Pirates, Castle, Fantasy) becomes inspired to go out and adventure, so that they can become a storyteller.

Listen to your passion (especially those that come from an unaltered state – most readily apparent in early childhood), revisit them, do not merely discard them. Combine the passion with a skill that is needed and wanted by others, and you will be in the ZONE!

What LEGO themes draw you, and how do they reflect you… or not? What qualities do you see reflected that you make use of in your life?

Born to build ! Gotta build like crazy ! Passionate about sharing what I enjoy about LEGO and using that to highlight the magic in LEGO System and LEGO BIONICLE. Sharing tips, opinion, commentary, and the little things relevant but perhaps overlooked about our favorite building bricks.